Apparently it is. Not exactly a textbook definition for photograms, but with a parallel history to photography dating back to the 19th century, photogrammetry measures ‘the distance between two points that lie on a plane parallel to the photographic image plane’ (thank you Wikipedia). 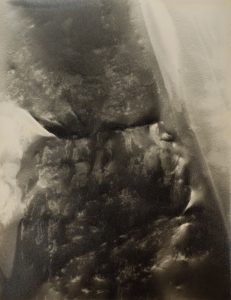 The journey has been a significant and insightful one. At this moment, it is a still place on an ocean of quiet. A place to look from into the currents below and think on which one to catch. OK. Enough with the watery metaphors! There’s lots of things to do; catch up on writing (posts and pieces), prepare for future events, and –unbelievably– buy a new sketchbook. Six years of groaning about having to keep a sketchbook to record practice-based progression and now –when I don’t have to– I’m off to buy my favourite soft cover journals to start a new one!

Back to photogrammetry. One application is the ‘process of making surveys and maps through the use of photographs, especially aerial photographs’.1 Not too far off then from the conceptual underpinning to A Perfect Alibi (unintentional at the time); the last images I made for a final MA project. An exploration of place, trace, and cartography. Or … a photogrammic series made in complete darkness measuring something. You decide.