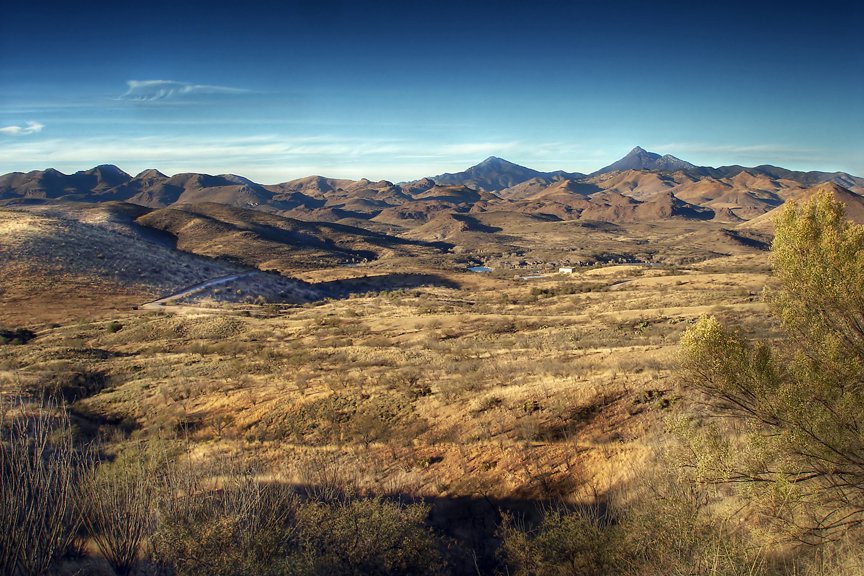 The Landscape Looks Back: One

It’s terrifying was my first thought. We were driving into the edges of the Mojave Desert on the Arizona-California border, looking up at the sharp edges of granitic up thrusts, blasted and sheared into the walls and channel of an excavated hill. The view expanded to an endless surge of stone in its implacable dissolution to sand. A terrible majesty of landscape that did not see me, or anything animate, in its gaze. The scrubby brush and stunted trees disclosed the possibility for life on the scattered stratum of soil, creviced by sedimentary bedding in the unrelenting process of being slowly pulled apart. Possible to live on, possible to live in, but this desert didn’t need people to exist: only be left alone, be allowed to continue without the interference of man’s need to meddle.

In less then a minute I was captivated, fascinated, and –unexpectedly– felt whole and intensely alive in the awareness of the desert’s separation from us: its harshness and obvious hazards creating an opportunity to learn how to live with a land, to be constantly aware of its inimical intransigence. Incorporating that into one’s nature was to be hypersensitive and intensely aware of staying alive. Not in an agoraphobic way that meant never venturing into the sere, but to be completely free of all but the most necessary of concerns. Free to experience a unique beauty.

Years later, I picked up a copy of Edward Abbey’s Desert Solitaire: A Season in the Wilderness, a narration and collection of essays from his time spent as a seasonal ranger in the Arches National Monument. Abbey was a contentious character, easy to label as misanthropic and radical, but in the desert’s paradoxes he found a place for himself, and possibly for us.

‘The finest quality of this stone, these plants and animals, this desert landscape is the indifference manifest to our presence, our absence, our staying or our going. Whether we live or die is a matter of absolutely no concern whatsoever … Let men in their madness blast every city on earth into black rubble and envelope the entire planet in a cloud of lethal gas – the canyons and hills, the springs and rocks will still be here, the sunlight will filter through, water will form and warmth shall be upon the land.’

A slightly different sentiment, though with similar contexts and connotations, later discovered in the writings of W.J.T. Mitchell in Holy Landscape: Israel, Palestine and the American Wilderness. Where Mitchell discusses the idolatry of place being enforced by ‘bulldozers and bullets’ in Israel, and the ‘prospects [of sudden and violent death] mixed with the sense of safe refuge’ that is the intricate place the Great American Deserts hold in the mythos of the ‘frontier as a wilderness to be traversed in search of a promised land’, Abbey disparaged the effects of culture and modernity on man and environment and advocated an almost segregational division between the worlds of nature and civilization. Somewhere between the two paradigms of splendid isolation and frontier mentality, we look to the desert, and the desert’s gaze passes over us and moves on.

‘… how can the landscape itself be said to have a perspective? Does this not suggest, quite literally, that the landscape looks back in some way at its beholders, returning their gaze with a blank, impassive stare, its face scarred with the traces of violence and destruction.’

In appreciation of Edward Abbey
W.J.T. Mitchell’s Holy Landscape: Israel, Palestine and the American Wilderness on JSTOR (read it for online w/ a free account)