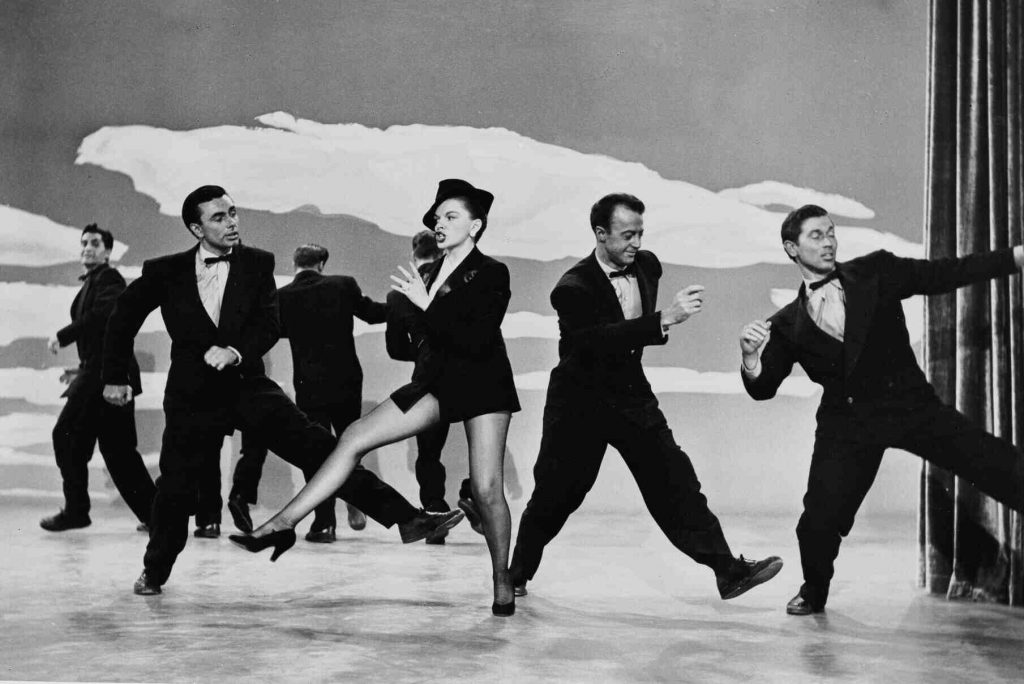 Can Summer Stock Save Our Souls?

Or … Why Does Everything Taste So Sour?

In the algorithmic-mined sludge that is a Facebook feed, random things can find their way into what is, purportedly, a bespoke, personalised experience based on your click history. And FB must be right because when I saw a post labelled ‘Popular on Facebook’ (and when did that happen?) by some Grammy-winning artist I don’t know sharing a film clip from Summer Stock featuring Judy Garland singing ‘Get Happy‘, I … clicked. Because –yes– I love musical theatre: from old to new and back again.

What should have been a mild three-minute escapist holiday became something else. Judy’s personal unhappiness was more obvious, seeming to counter every upbeat step and note. Her exhaustion percolating to the surface of her skin and flashing, like that cartoon skeleton x-ray flicker when lightning strikes you. The evangelical overtones of Ted Koehler’s lyrics rang with strange dissonance and eerie omen … Come on get happy / Get ready for the judgment day? Replete with a red sky burning behind heavenly-white clouds.

I might have made it to minute 1:09  –when Judy Garland is boxed in by men in suits on their knees raising their hands, whether to worship or wall in the exhortation to ‘get happy’ is unclear– when I pressed pause. And stared at the screen. What was going on?

What was going on was dissatisfaction. Dissatisfaction with the status quo. Judgment Day seems to be here and it’s nothing to get happy about. Plastics pollution has invaded down to the microcosm. Bullies and monomaniacal despots seem to rise in meteoric tyranny, riding the fan club crest of angry mobs screeching for equal time, but oddly not equal pay, equal justice, or equal rights for everyone else. Floods, famines and fires pound the shores of our complacency. We perceive ourselves to be the leaders of a free world, but our policies increasingly reflect an isolationist and insular trend as our political leaders bicker and blame everyone else for the shambolic state of things. Journalists are being subjected to banning, bomb threats, and dismemberment. Yes, news outlets have become blatant in their bias, that is part of their remit. It may be macabre to infer that a rising death toll of journalists in the past eighteen years is an indication of successful reporting. Regardless, an unencumbered Fourth Estate is a beacon for egalitarian democracy. It is also one of the first things a fascist regime will ruthlessly attempt to control.

We are so f*cked!

And fed up! Women are fed up. Men are fed up. Children are fed up. We are all fed up.  But we’re also exhausted. We’re so #unhappy that it’s difficult to take stock of the good things that have come from the bad. We’re Judy Garland needing to lose twenty pounds in eight weeks, so we can wear sheer black nylons, heels and a tuxedo jacket (and not much else).  Sing and tap dance; all with a bright smile.

We ask for unity, or accord, when what we really mean is the other side has to cave in. That is not a compromise, that is called losing. (Remember when a good compromise was when both sides gave a little to gain a little more?) We talk about pecuniary punishment for land management mistakes when people have died and/or lost everything but their lives. That’s like standing up at a chain-smoking grandfather’s funeral to shout ‘You stupid asshole! You deserved what happened!’ when we’re not even sure it was a smoking-related death.

Apparently, rudeness and bombast are the new black. There are 1,001 examples of this burgeoning culture of conflict every day. Our mass sociopathy is emboldened and bolstered by a digital remove provided through social media. That seems to be the price we pay for access to powerful, far-reaching, advocacy/marketing platforms; but even here that is progressively perpetrating an “us and them” divide.

So … Get Ready for the Judgment Day?

Unlike the pundits, I have no clear answers. However, none of the answers involve pulverising the opposition with vitriol and threats. I suppose my personal answer is to exercise a freedom that most of the World’s population doesn’t have: the right to vote. The other answer is to keep making, keep creating, and keep paying attention. Decide on what I can compromise on and try to make sure that the things I don’t want to compromise on don’t adversely impact someone else’s well-being. Finally, as much as I love the Great Garland, to do as Gene Kelly did in his breakout moment in Summer Stock; Use the squeak in the floorboard, dance and tear the news sheets, whistle a solitary tune, and stay informed.