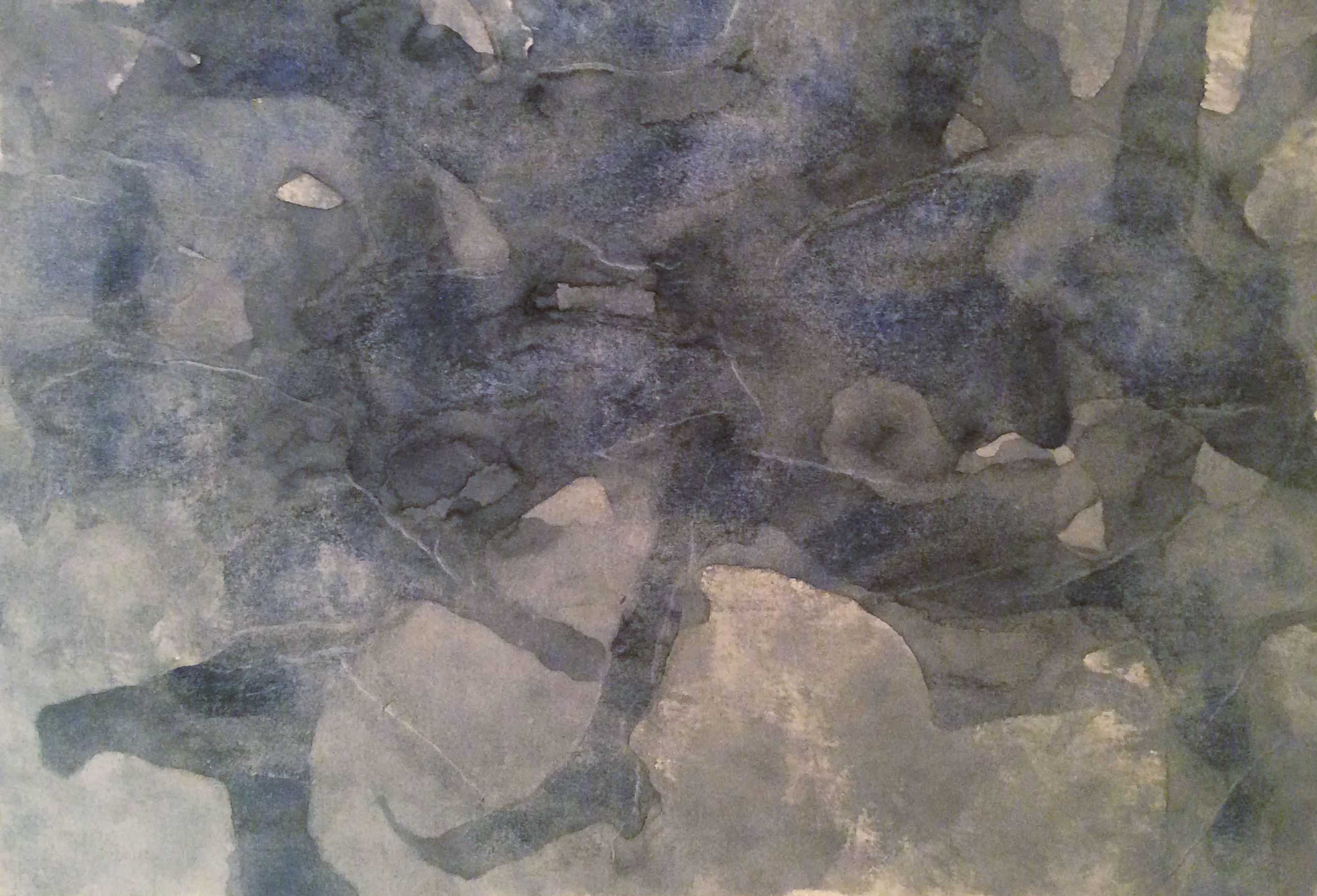 When an artist says they’re having ‘a bit of a creative play’ they are being serious; deadly serious. Because … it can only be serious business when you pour very wet watercolour over bog-standard sketch paper to see what may happen. Using a dilution1 of Payne’s Grey2 and Ivory Black with quite a lot of water, the solution pooled but began to take on some interesting shapes when I turned a hairdryer on it and guided the colour with bursts of air. 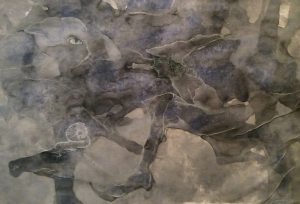 It’s been quite some time since I did something “just because”. There have been a few times when the experimental played a large part in developing an idea; but that was the point –to develop an idea. This time it really was to see what could happen when chance plays a leading role. There were some comedic elements: the paper began to buckle and tear in places as it was never meant for more then quick sketches. At 130 gsm, unbleached and machine-made, coming with the specific caveat ‘Not suitable for watercolours and acrylic paints’, it’s not very robust but it also began to crease in interesting ways!

After the watercolours had dried and I looked at it again, I could clearly see an image in the arbitrary streaks and pools. The first thing I saw was the cat’s head and the witch’s boot. Soon other pictorial details emerged and presented a narrative; I had a decision to make; Whether or not to bring out those details or just leave it alone as something interesting and odd. It took a few days before I sharpened the Prismacolors (actually, these days I only have two – black and white) and began to pencil in the lines and shades of what I saw in the ink blots.

So, why is creative play “serious business”?

The process brings up questions about creativity and where it resides. The painting was made by a low-powered cheap hairdryer, though I was the one wielding it. Was it an unconscious prompting or happy accident? Who knows! Creative play is a useful springboard to try out new things with little expectation imposed on the result. It can also be a way to relax and warm up those thought processes that can lead to a more defined and purposeful work. It did take me back to my undergrad days when Kate Walters gave us an afternoon workshop. Kate’s a very imposing woman who manipulates the rules of painting, using watercolours and acrylics, even the occasional oil paint on the same treated and/or untreated papers and boards. She’s probably not as tall as I remember her, perhaps her seriousness about play added to her stature. Her “humananimals” often begin with random mark making, and when she sees something in the fields of colour and contrast: then she begins to refine it. What starts out loose, becomes more focused, yet her final pieces often retain that elusive, spiritual looseness!

I do remember struggling in that workshop. Perhaps it was performance anxiety, and/or worry about ability. Instead of a liberating experience my efforts were reduced to random smudges of heavy colour and some quite eccentric (and not in a good way) marks. At one point I sensed Kate standing over me where I was working on the floor. She said nothing but she did make a soft noise, somewhere between a sigh and a tsk. I didn’t have the bottle to ask her what she thought, yet I am glad for the time she spent with us. And some of it may have even seeped into my tool box of ways to work.

After all, here I am, having ‘a bit of a creative play’!

(Full sequence at The Witch’s Cat)